This Peringuey’s adder (Bitis peringueyi) was located in the Namib Desert near Swakopmund by following a set of tracks in the sand which ended in a suspicious-looking swirl. It could not be photographed on a dune because it rapidly buried itself. The photo was obtained by placing it inside a large saucepan on a very shallow layer of sand.

Tim Low takes photos mainly to complement his writing. His images have appeared widely, in books, magazines, public displays, booklets, posters, websites. They illustrated a column he wrote for Nature Australia for 20 years and much shorter columns in the Brisbane News and other publications. His photos of useful plants have appeared on book covers in Australia, England and Germany. Hundreds of his photos appeared in Bush Tucker, and others in a calender published in the year of its release. Except in some of the blogs, all the photos on this website are his.

To enquire about images of useful plants contact Tim here. 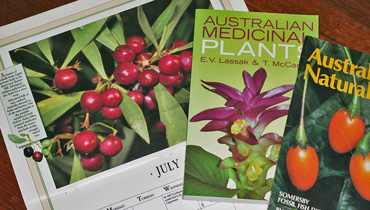