Weedy vines such as cats-claw creeper (Macfadyena unguis-cati) can grow faster than most plants because vines invest less in stems than shrubs and trees. They often increase in landscapes exposed to cyclones, floods and damaging storms.

Tim Low is a leading expert on introduced species. He was the first in Australia to assess the impact of climate change on weed and pest problems, and the first to review the weed threat posed by various new biofuels crops.

His most recent work was a detailed report about the controversial herbicide glyphosate, providing a perspective on its classification by the International Agency for Research on Cancer (IARC) as a probable carcinogen, and considering the implications for the environment if it is banned.

The Guardian published a long article, War of the Weedkiller, based on Tim’s article, as did The Land. Tim was interviewed on several radio interviews about the report, which was published in November by the Invasive Species Council.

An earlier report was for the Australian Federal Police and Director of Public Prosecutions about the threats to biodiversity posed by a man caught smuggling various reptiles and fish into Australia, several of which are highly invasive elsewhere in the world, including snakehead fish and alligator snapping turtles.

In 2017 he produced a report, Invasive Species: A Leading Threat to Australia’s Wildlife, commissioned by the Invasive Species Council, and subsequently highlighted in an article in The Australian. It notes that most animal extinctions in Australia have been caused by invasive species.

His work over the years has been wide ranging. For the Australian Department of Environment and Heritage, Tim produced a report about invasive species and climate change. For the Murray-Darling Basin Authority, he assessed the impacts of climate change on introduced fish and weeds in a large report. He has also assessed the weed risks posed by new biofuel crops, and reviewed plans to eradicate rodents and weeds from Lord Howe Island.

For the Australian Department of Environment and Heritage, he co-authored a large report about feral animal impacts in the Rangelands. A summary version was subsequently published by the Australian government as a 40 page booklet, and factsheets were generated as well.

Tim reviewed the Australian Government’s Weed Risk Assessment, as a case study of the precautionary principle in practise. This appeared as a chapter in the book, Biodiversity and The Precautionary Principle. The project was a joint initiative of the World Conservation Union, Fauna & Flora International, TRAFFIC Resource Africa.

In many reports for local governments, Tim has advised about weed invasions and management. A nationally-funded eradication was mounted after he detected parthenium weed (Parthenium hysterophorus), a Weed of National Significance, on Christmas Island. He persuaded the Queensland Government to assess the weed risk posed by the Mexican bean tree (Cecropia species), which was subsequently declared a target of eradication. It has become a target of control in New South Wales as well.

Tim has served on a range of government committees that addressed weed and pest problems, including the Biosecurity Queensland Ministerial Advisory Committee, The Land Protection Council (Queensland government), the National Hymenachne Management Group and the Biodiversity and Green Corridors Subcommittee (NSW government).

Tim has often been interviewed about invasive species problems, by media outlets in Australia and overseas, discussing problems such as the spread of cane toads in north-western Australia. He has written many articles about the issues, including on weeds spread by aid projects, and the need for corridor risk assessment. 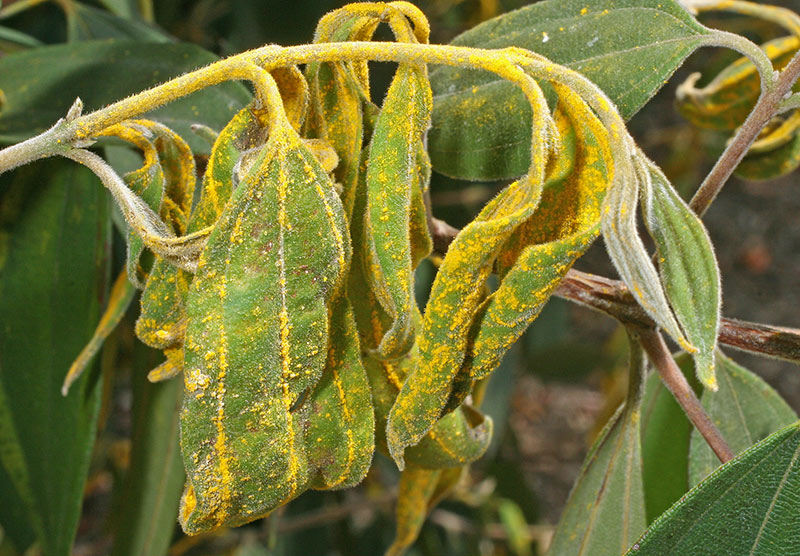 International cultivation of Australian plants increases the risk of new plant pests reaching Australia. Myrtle rust (Uredo rangelii), which should properly be called eucalyptus rust or guava rust (Puccinia psidii), is a pathogen of neotropical Myrtaceae that began killing young eucalypts in South American plantations in 1973 before reaching Australia in 2010, where it now infects a wide range of trees, including tea trees (Leptosperumum, Melaleuca), lilly pillies (Acmena, Syzygium), eucalypts (Eucalyptus) and the scrub turpentine (Rhodamnia rubescens) illustrated here. It is rated a very significant economic and biodiversity threat that could reduce the viability of carbon storage plantings and endanger rare plants.

Australia has exported many wattles (Acacia species), and pathogens that attack them in Africa and Asia, such as Ceratocystis acaciavora and C. albifundus, may reach Australia and complement the problems caused by eucalyptus rust. Note Wingfield et al. (2011): ‘It is not unlikely that new encounter pathogens such as C. albifundus will eventually move to Australia and could cause serious damage to native Acacia spp. in that country.’ Tim attended a workshop in South Africa in 2010 that raised this concern. 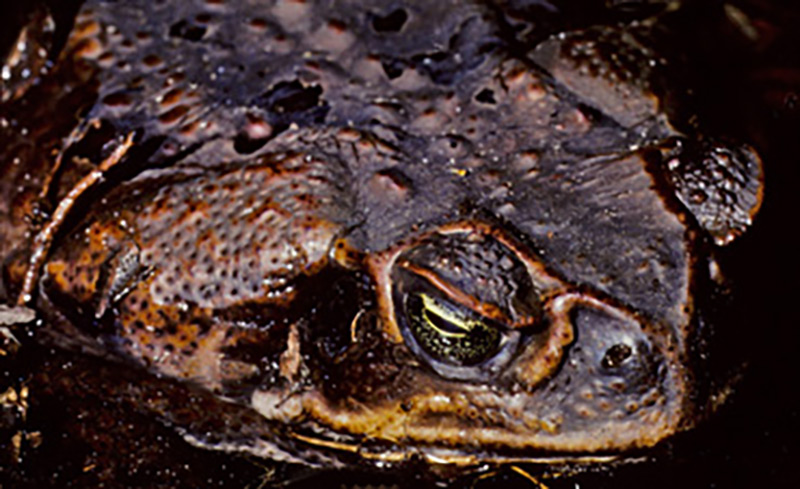 So successful are cane toads in Australia that calls to stop them spreading further are unrealistic. A better focus would be on keeping other toads out. Tim has raised concerns about black-spined toads (Duttaphrynus melanostictus), which have often been found at Australian ports. Other amphibians of concern, because they are spreading through South East Asia with trade, include the painted bullfrog (Kaloula pulchra), known from an interception at Perth airport, and the green paddy frog (Rana erythraea). 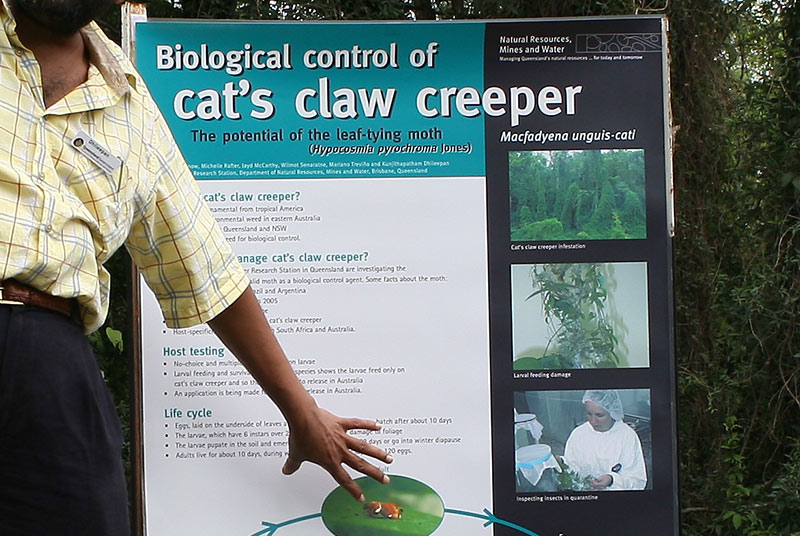 Tim knows how weed and pest policies are developed, after many years’ service on two government committees, the Land Protection Council and the Biosecurity Queensland Ministerial Advisory Committee. He has travelled widely looking at invasive species management, and in 2007 attended the release of a new biocontrol agent, a leaf-tying moth (Hypocosmia pyrochroma). 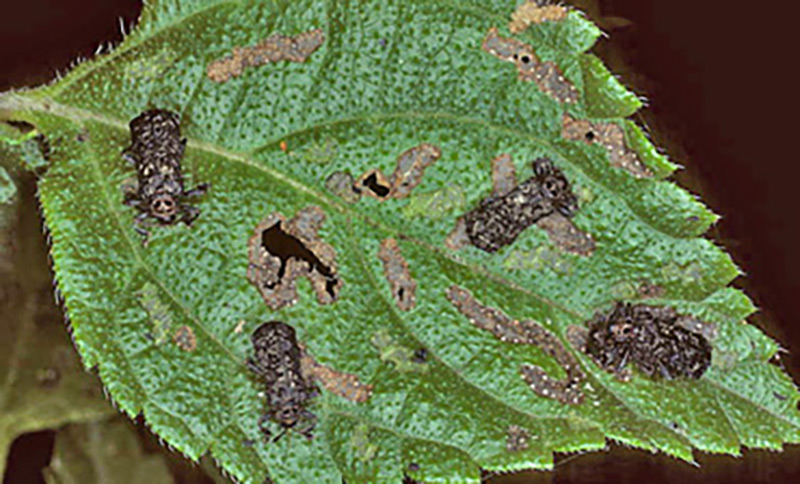 Rising carbon dioxide levels will alter the effectiveness of biocontrol agents. They are expected to reduce the efficiency of glyphosate, the main herbicide. Tim has reviewed these issues, noting that lantana bugs (Octotoma scabripennis) improved their performance in experiments when temperatures and carbon dioxide levels were raised, while an agent that targets Paterson’s curse did worse.