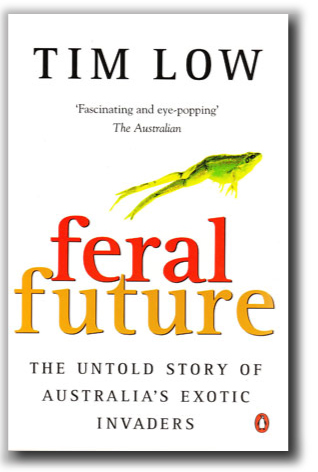 This book has alerted large numbers of Australians to the problems posed by introduced species.

Published in Australia by Penguin and in North America by the University of Chicago Press, it provides an overview of invasive species in Australia, and Australian species as invaders elsewhere in the world – including weeds, vertebrates, insects and marine species – and reviews different pathways of invasion. Listed in New Scientist as a bestseller, it was highly commended in the 1999 National Literary Awards.

Tim has been invited to speak about the contents at many conferences and other events in Australia, and also in South Africa, New Zealand and Hawaii, often as opening keynote speaker. Feral Future is recommended reading in many university courses. A quote from it was read out in the Australian Senate. Tim has been interviewed about invasive species problems and management on many television and radio programs, including a TV New Zealand episode of Assignment named the book.

The book inspired the formation of a national environment group, the Invasive Species Council, that lobbies for better policies on invasive species.

“Exotic invasions, because they are irreversible and cumulative, deserve to be taken more seriously. More than 2700 weeds have become established in Australia so far, at a cost to the economy of more than $3 billion, and each year another ten take root. Weeds now make up 16 per cent of Australia’s wild plant species. Two hundred or more foreign animals and algae infest our seas. The number of exotic insects, fungi and micro-organisms is anyone’s guess. These figures will keep growing, and while some ecological problems (pollution, greenhouse gases, deforestation) are partly reversible, our pests are here to stay.”

“Britain is now home to our barnacles, beetles, wallabies, earthworms, mushrooms, tree ferns and daisies. Even our small neighbour New Zealand has emerged as a major exporter of pests, her worms killing off European earthworms and eels and her snails now infesting the Thames.”

This book is currenty out of print, but a reprint is under consideration.

“improbably gripping”
– Bill Bryson, Down Under

“Mr. Low’s account provides fascinating reading even for those of not normally engrossed in the world of nature.”
– Washington Times

“Full of fascinating, appalling facts and stories about how drastically our environment has been changed by these invasions and by our farming and gardening practices, this is a gripping work that deserves a wide readership.”
– The Age

“His book seeks to raise our ecological IQs, and it does.”
– Weekend Australian

“This book must be in every library and serious gardener’s bookshelf.”
– Courier Mail

“Feral Future is a treasure house of information. Open it at random and you will find something to surprise, charm, challenge or choke you.”
– Chain Reaction

“This book will change your outlook on the world.”
– Wildlife Australia

“Low tells the fascinating story of how all kinds of animals from Africa, Europeand Asia were brought to Australia”
– Diversity and Distributions

“Gardening, he says, has done much more harm to Australia’s environment than mining, a claim he supports convincingly.”
– Weekend Australian