Climate change is expected to increase fire risk over much of Australia by increasing warming and drying, although in arid regions fire risk may decrease from reduced connectivity of fuel. In wallum woodland (pictured), fire frequency has a strong impact on understory composition

This report for the Queensland environment department is one of the largest climate change and biodiversity reports yet produced in the southern hemisphere.

It draws on Australian and international literature to synthesise a large body of information about biodiversity, reviewing responses to past climate, distribution patterns, genetic evidence, modelling, experiments, and expert opinion, to produce regional and state-based recommendations for landholder management. It sets out 17 scientific assumptions that guided its approach.

Natural climatic variability is so large in Australia it masks human impacts on the climate, and serves in itself as a reason to manage for extreme climatic impacts. The heatwave that caused the largest number of documented bird deaths anywhere in the world was in central Australia in 1932 (McKechnie and Wolf 2010), well before any major increase in greenhouse gases. A series of articles published in the South Australian Ornithologistafter the event recorded deaths of many thousands of birds over large areas of central Australia. Tim Low summarised these as an indication of what to expect in western Queensland in future. His report also documented past responses to droughts and cyclones.

Noting that many Australian plants, including eucalypts, have poor seed dispersal, the report argues for the importance of pollen migration as an alternative or complement to plant migration:

“Eucalypts lack dispersal structures on their seeds (apart from small wings on Coymbia seeds), implying limited potential for range expansions in response to climate change. Instead, they invest heavily in pollination, evolution having favoured pollen-mediated gene movement ahead of seed movement (Reid and Potts 1998).”

The management section thus recommends better conservation of long-range pollinators. Other recommendations include a focus on climatic spaces, monitoring of increaser species, more investment in fire management, and more consideration of soil attributes.

Release of the report was announced in Queensland parliament by environment minister Kate Jones in June 2011. Tim presented its findings to the Greenhouse 2011 climate change conference in Cairns. The report was repeatedly cited in two subsequent CSIRO reports about Queensland biodiversity and climate change and it is has been cited in a number of journal articles.

Here is a quote:

“for conservation managers with wide experience there is much about the future that will be familiar: droughts, fires, and declines of some species and increases of others. Even the arrival of new species will not be without precedent, since many national parks in recent decades have been colonised by additional species such as crested pigeons and galahs benefiting from regional landscape changes…” 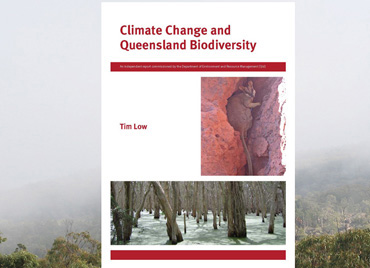 This report is the first to assess the impacts of climate change on Queensland biodiversity. It provides a general review and assesses the implications for each of the state’s 14 bioregions 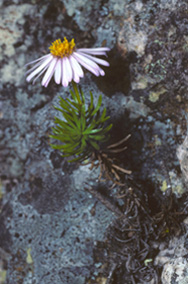 The daisy, Tetramolopium vagans, confined to rock crevices on four rocky peaks south of Brisbane, has its nearest relatives in north Queensland and New Guinea. It is one of many plants to indicate by its distribution that acid volcanic peaks in South East Queensland have served as long term refugia for small plants with limited mobility.

Another example is the unusual resurrection grass Micraira subulifolia, found on the Glasshouse mountains and also in tropical Queensland. 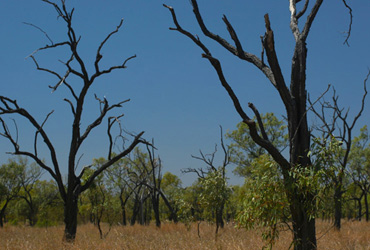 The most serious drought ever recorded in inland north Queensland, judging by soil water deficits, occurred during the 1992-1997 El Nino, when ironbarks (Eucalyptus xanthoclada) died over vast areas.