Bird Research of the Century

A paper that came out in Science a fortnight before Christmas counts as the most important work on birds this century, by offering something that has eluded science for well over a century – a reliable tree of life for the world’s bird orders.

Biology was shaken some years ago by evidence implying that parrots and perching birds are closely related.

Links between the bird orders have proved extremely difficult to determine, and except for intelligence and a facility for learning songs, there is nothing about perching birds, which include honeyeaters, crows and sparrows, to suggest they are related to parrots. Their beaks and feet are very different.

The evidence that emerged was genetic, but some genetic studies did not find this relationship, so in my book Where Song Began I equivocated, describing the relationship as probable but not proven.

The new paper in Science, because it is based on 48 whole genomes of birds, all but proves that relationship as real. And for the first time, it shows the relationship of each bird order to all others. 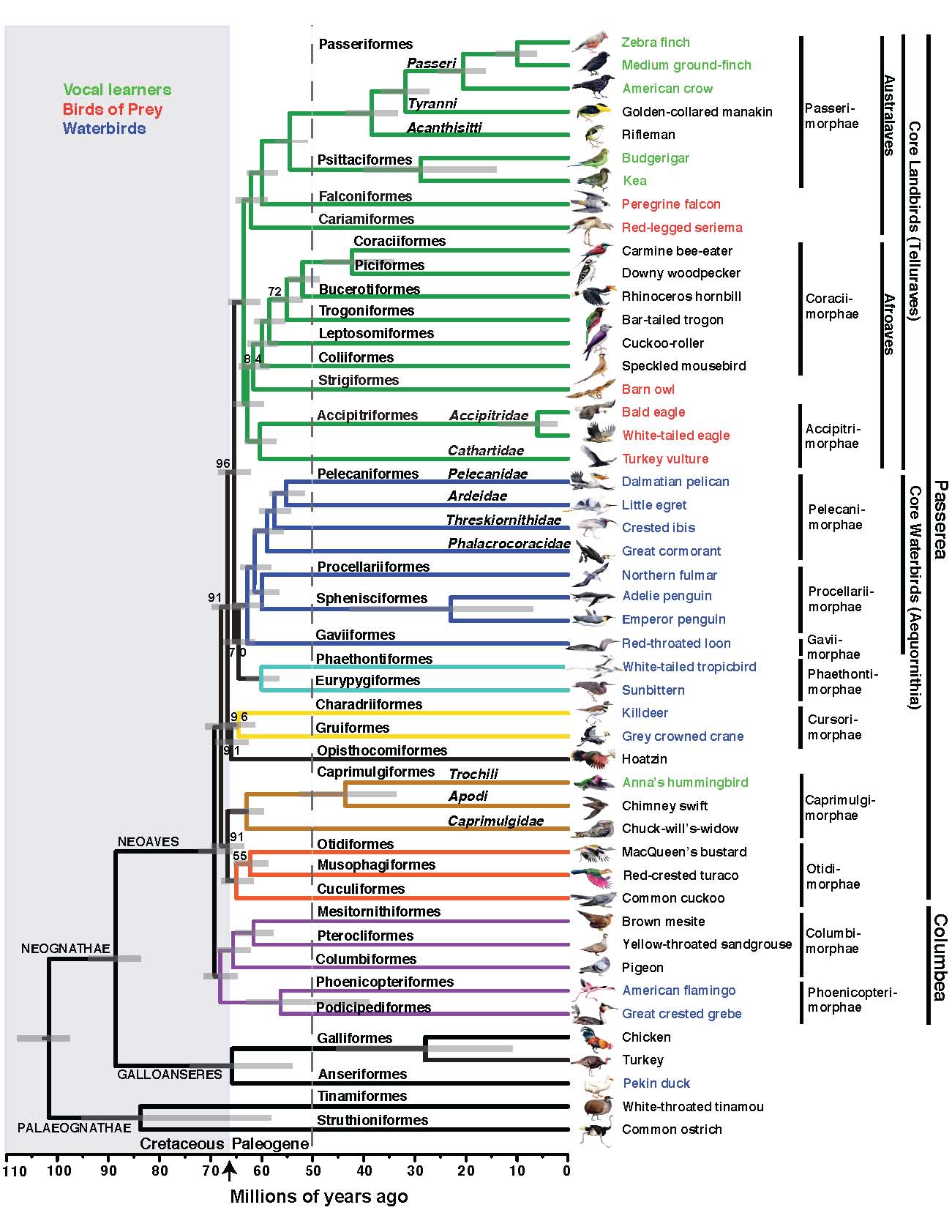 For many years we have known that Palaeognaths (ratites, tinamous) form the first branch, followed by waterfowl and landfowl on the next branch, but no one could agree on what came next.

A big surprise is that pigeons (along with sandgrouse and Madagascan mesities) are related to flamingoes and grebes, and that this grouping of birds arose next.

It was previously known that pigeons are close to sandgrouse (which they strongly resemble) and flamingoes to grebes, but not that these groupings are close to each other.

The fourth branch takes in cuckoos and bustards as close relatives, along with nightjars, hummingbirds and swifts.

Those unversed in bird origins may be surprised that birds as different as flamingoes and pigeons could be related. The demise of the dinosaurs (except for the one species that gave rise to birds) created such a large vacuum that early birds evolved very quickly in multiple directions, resulting in relationships that look odd today because most of the species that arose early on went extinct, leaving nothing alive today to provide a link between, for example, bustards and cuckoos.

The rapid evolution explains why earlier genetic studies, which compared short gene sequences rather than whole genomes, could not provide a definitive tree of relationships, because of a problem called incomplete lineage sorting.

The genetics have been telling us for a few years that falcons are closer to parrots and perching birds than to eagles, hawks and owls, and the new tree makes sense of that odd finding. It implies that about 65 million years ago one predatory bird left two successful descendants, one giving rise to the falcons, seriemas and terror birds, the other to eagles, hawks, vultures and owls.

But as well as producing these groups of predators, the first bird also gave rise to parrots and perching birds, and the second spawned a vast array of forest and woodland birds, including bee-eaters, kingfishers, hornbills and woodpeckers.

Questions are now being asked about the significance of a predatory lifestyle in giving rise to many groups that are not predators. The tree implies a carnivorous ancestor for seed-eating parrots and finches, nectar-feeding sunbirds and honeyeaters, and most small insect-eaters, including aerially feeding swallows. That parrots and falcons both have hooked beaks no longer looks like a coincidence.

The branching pattern suggests that fragments of Gondwana played a key role in producing the world’s forest birds, as all the birds descended from the first predator have their roots in Australia (parrots, most perching birds) or South America (falcons, seriemas, the extinct terror birds, suboscine perching birds) and the others show strong links to Africa.

This point was made a couple of years ago (Ericon 2012) but at the time there were so many doubts about the avian tree that it was somewhat speculative.

The Science paper is available free online, but I wouldn’t recommend trying to read it because the language is so technical. Here is a taste:

No mention of birds here, only genetics, but the talk of a highly resolved tree means that we can have strong faith that the tree genuinely represents the directions taken by evolution, which is not something that could be said about earlier attempts to produce a bird tree. To see where all the world’s birds fit onto this tree use John Boyd’s website.

The paper is one of 28 published nearly simultaneously by the Avian Phylogenomics Consortium, a large group formed to unravel bird relationships. More than 200 scientists from 80 institutions in 20 countries were involved in the work, which required the complete gene sequencing of 45 bird species. This was completed after six or seven months, while the task of processing all the data obtained, undertaken by three supercomputers in the US and Germany, took a further three and a half years.

The genome data and new tree are providing many new insights into birds beside those I have mentioned here, and will do so for many years. The 28 papers cover such issues as the evolution of bird song, tooth loss and sex chromosomes. Lead author Erich Jarvis is more interested in how birds learn to sing than in bird relationships as such.