Lyrebirds are the ultimate high achievers: the world’s best songsters, the world’s oldest songbird line (along with scrub-birds), beloved cultural icons that grace our coins, and spectacular ecosystem engineers. They may be something else as well – birds that save human lives.

The ‘ecosystem engineer’ tag refers to the changes they make when they scratch the ground to unearth insects. One lyrebird in a year can shift 200 tonnes of soil and litter per hectare, causing soil erosion and uprooting ground-hugging plants, including, in Tasmania, an endangered orchid. 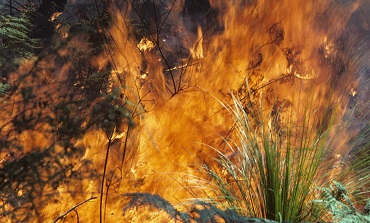 A new paper by Daniel T. Nugent and two colleagues takes the engineering concept further by concluding that lyrebirds reduce bushfire risk by burying leaf litter and uprooting the grasses and bracken that carry fire.

They describe one site near Melbourne that because of lyrebird scratchings is virtually devoid of litter over an area of several hectares. Buried leaf litter decays quickly because it is brought into contact with soil microorganisms and invertebrates rather that drying out on the surface into fuel that can spread fire.

On average, lyrebirds were found to reduce litter fuel loads by 25 per cent by burying 1.66 tonnes of litter per hectare. Nugent’s modelling suggests this reduces the risk of fires occurring and the intensity of the fires that do occur. Lyrebirds also create refuges from fire by removing all the fuel from some gullies.

They can’t feed where there is a thick understorey, so by scratching up seedlings they are in effect ‘maintaining a suitable habitat for themselves through their own activity’, Nugent says.

Noting that foxes and feral cats kill lyrebirds, Nugent and his colleagues offer a pithy punchline:

“The loss of lyrebirds from forests adjacent to and within urban areas could result in higher fuel loads and an increased likelihood of wildfires threatening human life.’

In other words, lyrebirds save human lives.

The research was undertaken north-east of Melbourne in an area hit by the Kilmore East–Murrindindi fire, which extended over 250 000 hectares and was the worst of the fires that struck Victoria on 7February 2009.

Nugent suggests that elsewhere in Australia mallee-fowl and burrowing bettongs could play a similar role in reducing fire risk in Australia. Both species are much rarer than they once were.

Lyrebirds were introduced to Tasmania in the 1930s as a misguided conservation measure and the digging they do there today is a serious conservation concern. As I noted in Where Song Began:

“The Tasmanian government ranks them a high risk to the Tasmanian Wilderness World Heritage Area, worse than starlings, cats and rabbits, and put a fence around the only known colony of an endangered orchid (Thynninorchis nothofagicola) to stop them causing its extinction.”

They proved a blessing when I was writing Where Song Began because they were birds with charisma that could play a starring role in my chapter about global songbird success.

One regret about writing books is that once they are published the opportunities to update them are very limited. A likely role for lyrebirds in limiting fires is something I would like to have mentioned.

Something else I would have mentioned – of no relevance to lyrebirds – is a dead grey falcon I saw on display a few months ago at the Australian Museum. It had been collected with the head of a ringneck parrot clamped to its foot. I wrote about parrots having powerful jaws and Australia’s peregrine falcons having especially big feet to subdue them. This museum exhibit showed that jaw power. No other birds have heads that would stay fastened to a predator’s foot long after the owner had died.