Alive only on Film

[This is a book review that appears in the Spring 2014 issue of Wildlife Australia magazine.]

With animals continuing to go extinct any book that eyes extinction in a fresh way deserve our attention. Lost Animals is significant because it features all the world’s extinct mammals and birds that are survived by photos. As Erroll Fuller says in his introduction, about the difference between paintings and photos:

“It seems that a photograph of something lost or gone has a power all its own, even though it may be tantalisingly inadequate”.

That is what I felt after paging through this book and staring at the 28 species that look out from the plates. The lowest resolution images, those of an imperial woodpecker in Mexico (taken from film footage), struck me as especially powerful, perhaps because they resemble scenes out of a dream, one of those happy dreams we wish we could return to. This footage only surfaced in 1997, 41 years after it was taken, and the quality is poor because the film is old but because the biologist who shot it was sitting on a mule. Also very potent are some of the photographs in colour, because the animals look too vivid to be defunct, and because the colour tells us the extinctions happened recently.

Fuller provides dates of extinction or last sightings, including 2004 for the Hawaiian po’ouli (a bird), 2002 for the Yangtze River dolphin, 1988 for the Hawaiian ‘o‘u (another bird), 1985 for the Alaotra grebe of Madagascar and Kauai ‘o’o of Hawaii, 1984 for the Guam flycatcher, 1983 for the Aldabra brush warbler, and so on and so on.

His text is not as detailed as it might be, but Fuller has many interesting stories to tell and telling points to make: that the last Yangtze River dolphin was honoured with a funeral broadcast on Chinese television; that a 1954 novel about the last eskimo curlew sold 3 million copies; and that the world has lost its two largest woodpeckers, the imperial and ivory-billed.

Two Australian icons are featured. The paradise parrot entry offers nothing new, displaying photos that will be familiar to Australian naturalists, and the thylacine entry is marred by claims of ‘compelling evidence’ that the species survives on mainland Australia or even in New Guinea. Fuller does include a couple of thylacine photos I had not seen before, including one taken at a zoo in Washington. Had he covered amphibians he could have included several Australian frogs, featured in an article I wrote for the Spring 2013 issue of Wildlife Australia.

The New Zealand entries interest me the most, because I did not realise that photos existed of the extinct laughing owl, greater short-tailed bat and New Zealand bush wren, including colour photos of the last two. 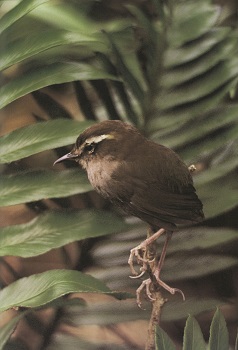 The demise of the bush wren in 1972 is especially tragic because of DNA and anatomical evidence showing that the New Zealand wrens represent the oldest surviving lineage of perching birds, the order that makes up a majority of the world’s bird species, a topic I wrote about in Where Song Began. The wrens provide evidence that perching birds originated in Gondwana, but only two of the four species alive in the 19th century are still with us, and one of these, the rock wren, is endangered, and may yet be lost. (Other wren species went extinct during the Maori era.) Colour photos, including one reproduced here, were taken by New Zealand ornithologist Don Merton. I was very surprised to find they existed.

Hawaii matches New Zealand by having lost a large share of its birds. In Honolulu in 2004 I met the biologist who took the last photo of a Hawaiian ‘o‘u, and who told me about seeing the last few Kauai ‘o’o, birds that bore a striking likeness to honeyeaters. From a plane some days later I looked down on the rainforest in Maui that held the last po’ouli, a species that joined the ranks of the unliving a few months later.

Like the deaths of friends, modern extinctions can be difficult events to process. This book doesn’t help with that, but it does bring extinction into clearer focus. After you have viewed the photos, check the remarkable film footage of the last known ‘o’o, viewable at archive.org, and the 1956 footage of an imperial woodpecker, posted on Youtube.