I am on Christmas Island where Cyclone Gillian, which struck in February, showed her anger, as cyclones do. A stretch of rainforest in which Abbott’s boobies were breeding lost its canopy, and nests were destroyed and chicks killed. Many chicks rescued from the forest floor by national park rangers were reared and released.

The cyclone probably helped one bird, the Christmas Island goshawk, judging by all the sightings over the past week. I am here as a guide on the Christmas Island Bird’n’Nature Week, now in its ninth year, and fellow guides Mark Holdsworth and Sue Robinson, who band goshawks as a bird week activity, had more success catching goshawks than usual.

To attract one for banding they drag a fake rat on a length of fishing line 40 metres behind a slowly moving vehicle. The ‘rat’ is the leg of a teddy bear with a cable tie attached as a tail.

Goshawks that fly in to seize or inspect the ‘rat’ can often be caught because, like other birds on this remote island, they lack much fear of people. Mark captures them with a strong plastic peg mounted on the end of a fishing line. So devoid of fear are the birds that the coloured peg can be extended towards them and clamped around a leg while they sit on a low branch watching. Nowhere else in the world are birds of prey so fearless they can be caught like this. 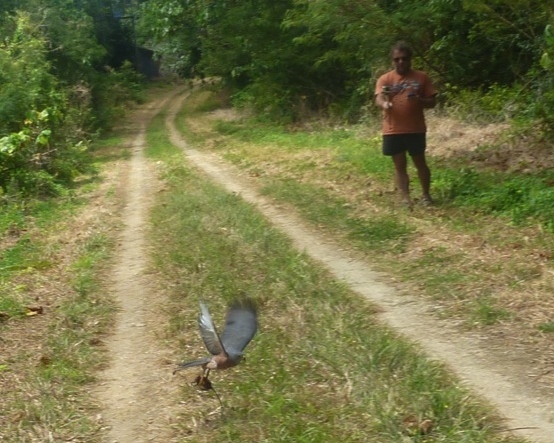 The unusually large number of captures this year – 12 – may show that cyclone damage has made the forest easier for goshawks to move through when hunting.  Over the past decade Mark has caught more than 300 to determine their population size and conservation status.

His data suggests that the population is large (about 200) and stable.  Christmas Island goshawks are exceptionally tolerant of other goshawks, even near their nests, allowing for an unusually dense raptor population.

That is good news, on an island that needs good news. In May this year the last Christmas Island forest skink died, becoming the second island species to disappear since I have been coming here, following the demise of the Christmas Island pipistrelle in 2009. I saw that last forest skink during the 2013 bird week, and hoped I would be seeing it again this year, even though, like most biologists who know the island, I had given up hoping a mate for it would be found.

When island rangers realised about six years ago that lizard numbers were plummeting they established captive populations, thereby saving from extinction the island’s unique blue-tailed skinks and Lister’s geckoes, but they could only capture three forest skinks, and all of them proved to be females. Reptile expert Hal Cogger once told me about a visit to the island many years ago when he saw more than 80 forest skinks around one fallen tree.

We don’t know exactly what went has gone wrong for the island’s lizards, but introduced wolf snakes and centipedes appear to be the main culprits. Last night, while waiting for a bird week dinner at the Golf Club, I caught a wolf snake on the ground outside. They are beautiful reptiles that are maintaining themselves on the island by eating introduced house geckoes.

As  part of bird week I take guests to the island’s only waterfall, which is reached by passing through a stand of rainforest that endured severe cyclone damage. A trail that was once in deep shade is now in the sun. Christmas Island swiftlets avoided this forest before because it was so thick, but now use it in large numbers, hunting insects among tree trunks. Like the goshawks, they probably benefited from the cyclone. I saw some flying up to arenga palm trunks to pluck fibres for their cave nests.

The damaged forest is rapidly rising again, but many weeds are growing in the clearings alongside saplings of the macaranga tree, a tree that does well in clearings because its leaves are so large.  I look forward to returning next year to see how quickly the rainforest returns.

On Greta Beach one day I found a young brown booby that had fallen from its nest on the cliff above and was trying to scramble back up – a hopeless endeavour. I caught it and with help from bird week guests took it to the ranger station where it is now being fed til it is ready to fly.

Bird week was made different this year but the opportunity I had to talk about my new bird book. At a public event in the Seasons Palace restaurant I mentioned how my many visits to the island shaped the content of the book.  As I say in Where Song Began, “Because each island is, in effect, a test tube with a unique mix of ingredients, they have special insights to provide.”

Christmas Island has remarkable birds, and less positively, a remarkable history of extinctions. Leaving aside lizards, it has lost four of its five native mammals, and there are grave concerns about the Christmas Island flying fox, the sole survivor. I saw two this week, each flying in bright sunshine, one at 10 am and another at 2 in the afternoon. On islands without predators flying foxes are often active by day. I am seeing them less often than in years past, and rangers say that some camps used in the past have been abandoned, and no new camps formed.

I look forward to returning to the island next year for the 10th bird week. Tonight I fly to Jakarta for some birding in Java, which I last visited 15 years ago.