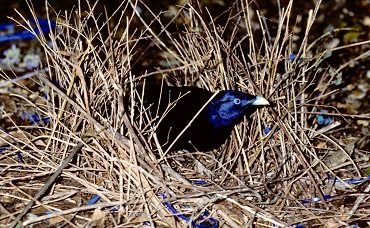 The enthusiastic response to my latest book, Where Song Began, has been gratifying, but I have noted that a couple of reviewers, while praising the book, hesitated over a core conclusion – that the world’s songbirds had their origins in Australia. One reviewer described this as a ‘suggestion’ as if it were just a bold theory waiting to be proved or disproved by proper evidence. That is not really the situation.

An Australian origin for the songbirds (oscines) has become the consensus position in science because the evidence is so strong, coming as it does from three sources: genetics, fossils and anatomy.

A vast number of genetic studies, using many different genetic sequences, have shown that lyrebirds are the most divergent of all songbirds, and Australian treecreepers and bowerbirds are the next most divergent. The immense genetic differences between these birds (and Australian scrubbirds, which are seldom included in the genetic studies) and other songbirds outside Australia imply that these birds last shared a common ancestor a very long time ago. It is difficult to imagine where that ancestor might have lived if not in Australia. If we were to use the language that was acceptable 15 years ago we could describe Australia as a hotspot for ‘primitive’ songbirds, and that makes it the only plausible place of origin.

I can understand why readers without a background in genetics might find this evidence less then completely convincing, but there is fossil and anatomical evidence as well.

This is especially significant given that Europe and North America have yielded up many more early bird fossils than Australia.

“Crown group” means they are the earliest fossils to show all the skeletal features that characterise songbirds. If we take into account stem fossils, namely those with some but not all songbird features, then fossils from the early Eocene of Queensland are the world’s oldest (Mayr 2013).

The anatomical evidence, when lined up with the genetic evidence, is compelling. Within the songbirds there are three kinds of syrinx (throat box), one unique to lyrebirds and scrub-birds, another unique to treecreepers, and a third found in the remaining 4500 species of songbird. The large genetic distances between lyrebirds, treecreepers, bowerbirds and other songbirds match the syrinx differences, in showing that early songbirds were proliferating in Australia, producing a diversity of forms not matched anywhere else. Songbirds are more physically variable in Australia than anywhere else, because they have been in Australia longer than anywhere else.

If what I am saying is still not convincing (and I do provide more detail than this in the book) then there are the opinions of experts to consider as well. As an Australian I might be accused of wanting to talk up an Australian origin for songbirds, but most of the experts listed below are not Australian.

Here is Per Ericson (2008) of the Swedish Museum of Natural History:

‘the falcons and seriemas diversified in South America and the passerines and parrots in Australasia. The ancestors of all these groups were once distributed in Gondwana and later became isolated in different continents in the Late Cretaceous.”

Here is Janette A. Norman, formerly of Museum Victoria, and four authors from Sweden, Denmark and Australia (Norman et al. 2009):

“A range of molecular datasets have identified the Australo-Papuan region as the centre of diversification for the oscine passerines (e.g. Sibley and Ahlquist, 1990; Christidis and Schodde, 1991; Barker et al., 2002, 2004; Ericson et al., 2002a).”

Here is Knud Jønsson from the University of Copenhagen, along with eight co-authors (Jønsson et al. 2008):

“There is now significant DNA sequence support for the view that the basal oscine lineages (Menuroidea and Meliphagoidea of Sibley and Ahlquist, 1990) originated in the Australo-Papuan region (and probably East Antarctica as well, considering the early Tertiary climate) (Barker et al., 2002; Ericson et al., 2002a,b) and radiated there, mostly as resident forest birds. These and other studies also indicate that more terminal groups, the Crown Corvida, dispersed out of Australia to other continents (Barker et al., 2002, 2004; Ericson et al., 2002a; Fuchs et al., 2006a; Jønsson and Fjeldsa˚, 2006a) beginning 35 Mya.”

A role for East Antarctica is very unlikely given the darkness there during winter since Mesozoic times.

I have not found anyone in recent years saying anything different. If anyone can locate a dissenting opinion I would be interested in knowing about it.

I suspect that any Australian who remains hesitant about accepting an Australian origin for songbirds after they have read my book is guilty of cultural cringe, of being unwilling to accept that Australia could have special importance as an evolutionary centre for birds. Or maybe they think they would already have heard about it if it was true. One reason why I became a science writer is that I realised there are so many amazing stories in biology that the public does not know about.

Ericson PGP (2008) Current perspectives on the evolution of birds, Contributions to Zoology 77: 109–16